Skip to content
You are here
Home > In the News > Remembering St. Nick’s Pub

It was Friday morning about a week ago  and while in the middle of getting the word out about “48Hours in… EL BRONX”, that I receive a text from a friend,

I respond as only one does…

I immediately text another friend, a musician who lives in the neighborhood and had the same affinity for the pub as I did.

She didn’t know yet, but made a call and within minutes confirmed the news, following up with photos of the building 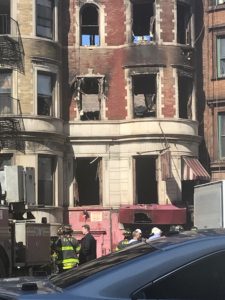 This was all just too much for me to take in.

Weeks before, I’d been in the neighborhood and noticed the pub opened.  It had been years since I’d seen the inside.  Reports were there was a movie being shot inside.  It was nice to see life in the tiny space again, even if it was just a few PAs and production equipment.  A flood of memories came to me.

My memories of the pub were many, especially when I lived on 148th and Broadway, during the beginning years of my MFA.

I’d also gone to St. Nick’s pub before I officially lived in the city, met a friend’s brother for drinks and had fallen in love with what Harlem was then.  I had no idea I’d live so close, but when I did turn out to be 3 blocks away, St. Nick’s became the only place at the time that I would tell friends to meet me.  This was years before Tsion or Harlem Public…

It was uptown, it was jazz and food on some nights… it was a home.  You saw people from the community and students from all over.  They knew the place to come for inexpensive drinks and good music.  I could have gone alone and found friends, (not only because I find friends wherever I go), but because St. Nick’s was that type of environment.

This story is of course developing.  The film was Edward Norton’s “Motherless Brooklyn”.  The firefighter who died, Lt. Michael Davison, was the father of 4 children.  I was not a mother when I frequented the pub, but I am a mother now.  I cannot imagine my children losing their parents in such a way.  I cannot imagine my children losing their parents period.  It’s not something you wish on anyone. (There’s a gofundme page for the firefighter’s family if you click on his name above).

Regarding the cause of the fire, I don’t know how it happened, but I know how I feel… sad.

Another piece of Harlem history is gone.

The next and most devastating phase following the fire was watching the building being torn down.  I watched on instagram and was grateful for once to be far from my old neighborhood instead of blocks away.  I don’t think I could bear passing the spot day after day.  I cringe at the thought of a luxury building going in the place where the 123 year old townhouse once stood.

For now, St. Nick’s website is still up, and it’s nice to see what they were – the schedule.. how busy it was… videos and more photos.  If nothing, it’s a nice place that serves as a sort of memorial.

I’m sharing my photos from January 18, 2009.  I was there with my dear friend from high school… my sister.  The photos below are of the atmosphere.

We were two young women on a Saturday night in Harlem.  There was music 7 days a week at St. Nick’s and Saturday starting around midnight was AFRICA NIGHT.  Abdoulaye Alhassane Toure was performing the night I took these photos.  I remember the woman getting up and just dancing.  She was free.  I remember photographing a friend I’d made from Harlem School of the Arts downtown the street.  St. Nick’s was for everyone and you felt that walking down those old cement stairs and through the old front door.

I want people to know what this space meant to others.  My story is of a graduate student making her way in the city… finding comfort in the nooks and crannies of her new neighborhood in the late 2000’s – her adopted home.