Skip to content
You are here
Home > motherhood > Mourning Motherhood : Sex and the City Style 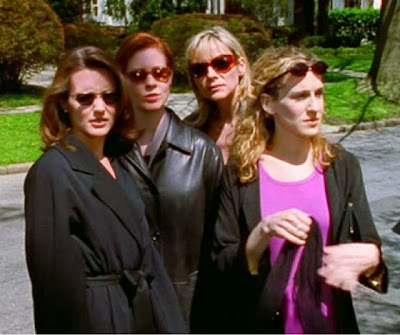 Dressed in Black, they headed to a baby shower, to mourn the loss of Laney, a friend who had left the single NYC life behind, married a Wall Street banker and moved to Connecticut.  Charlotte was of course excited and respectful of all the baby shower duties, so it only made sense that she felt the sting of her baby name being stolen. Which is exactly why you don’t tell your baby names to other people…

By the end of the episode, Mama Laney, facing a mommy-crisis, was near her infamous strip tease, but couldn’t get her supportive pregnancy clothes off, leaving her fumbling on a pedestal in a room full of semi-drunk strangers.  Instead of being the life of the party, she was the pregnant woman who should have just stayed home with her hormones, ranting about not recognizing herself in the mirror.
This anti-motherhood sentiment spreads far and wide as young independent women fear being tied down to anything or anyone, desperate to be what they dreamed of as little girls.
Maybe I witness it more in New York.  I am one of the few of my friends having children here, and of those women, I am the youngest at 30 years old.  Women here either work at their career longer or do both, work and raise children, which is exactly what I had intended to do (in that life plan that I am still working on) …doing both.
Never did I imagine a spell of unemployment so long, carrying me from the birth of my daughter and through another pregnancy…

My plans included the working mother balancing both and loving it.  It is what I feel I was made to do… And in this city, no less.

I distinctly remember that one of the semesters I had the best GPA in High School was when I was doing multiple activities.  Although the work got harder over the years, that type of juggling worked and still works best for me to a degree.  It is stimulating and gets me moving.
After trying for nearly two years, I know that I am not a housewife.  But I’m not purely a career woman, either.  I love the idea of working on a home, but crave a job that gets me in the adult world, if only for hours a day even. I am a woman that desires both… needs both or else her psyche will burst.
While motherhood always seems to signal the loss of something in most mainstream media, (like the

women in black heading to the baby shower), I have only felt a strength since embarking on this journey that was unknown to me in my single mingle days.

So instead of mourning the loss of life, I would love to see having children depicted not as a burden, but a celebration – an extension of your life with your partner.  I understand that it is difficult to express that within a culture that is mainly one side or another.  The in between is where I feel there is much exploration and where that discussion truly lies.  The capable and educated women who cannot afford full-time or part-time childcare, the families of two-parents working multiple jobs to make ends meet. We loss this in-between exploration with the dawn of Reality Television and The Real Housewife, who did everything and looked perfect while doing it.

So let’s raise a glass to being a mother in all it’s many forms!
What do you love about this job?  Do you / Did you mourn your pre-baby days?