Skip to content
You are here
Home > Detroit > Does ‘DETROIT’ tell the story you want to see? 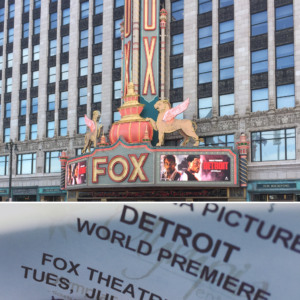 By all means make your own decision on whether or not to see it, or where or not to like it…

Last week, I told you what I thought about the film after attending the Premiere with my brother in our home-city on Salon.com.

The flood of critique over the film encourages me.  Post-Detroit’s World Premiere of the film on Tuesday, July 25th, the headlines say it all...” ‘DETROIT’ Gives Very Little To The Black Community To Hold On To” on Vibe.com

or Angelica Jade Bastien’s Review on RogerEbert.com.  “Watching “Detroit” I realized that I’m not interested in white perceptions of black pain.”, she writes.

I left the theatre of two minds: happy to be with family in my ever-changing home-city but a little dumbstruck.  My brother and I walked out of the FOX theatre, the bustle of Hollywood around us.  We took a selfie to appropriately document our time as two adult-siblings hanging out and then walked through the neighborhood to a nearby bar, (reminding me of the metro area I was heading back to in a couple days), Queens Bar.

We talked it out… amongst ourselves and friends we ran into, getting their take on the history of the city they knew from their parents who had lived through this experience, either riot or rebellion in their youth.  There was a lot of silence… what did we really just see… Something just didn’t feel quite right… the common thread tying most of the reviews and articles on the film together: “Detroit” was directed, written, produced, shot, and edited by white creatives who do not understand the weight of the images they hone in on with an unflinching gaze.”, writes Angelica.

But with “Detroit,” she had to wrestle with how far to push reality — how to convey the real-life horror of racism, without exploiting black trauma. “It’s really a question of how do you humanize and how do you bring to life a situation,” Ms. Bigelow said. “I suppose you use a personal judgment, I guess.”

Personal Judgement or not, did Ms. Bigelow have the right to tell this story of a city fraught with a racial history goes back so far or so deep that many have forgotten.  As a Detroit native, am I interested in an outsider’s perspective?  I would have been more interested if an outsider had encouraged some home-city talent to be involved….AT THE VERY LEAST.  Who is going to stand up for Detroit?  If Ms. Bigelow was consulted by her friend (another Native Detroiter), professor and historian, Dr. Michael Eric Dyson, I would have liked to see a black producer line the stage at the FOX alongside the otherwise all-white team.

These things matter to me.

It is a basic representation issue.

The film’s screenwriter, Mark Boal made his own case on Vulture.  “…the events in Detroit are hard evidence of a cultural crisis that remains unresolved, of two Americas that still don’t know quite how to deal with each other.”

I could go so far as to inquire whether or not this extends into the production team.  If one truly understands what is happening in Detroit, then they understand the optics of opening a film introducing a crew of white creatives to a packed house crowd in a city that is 83% black.

ok… I’m taking a deep breath here and maybe it’s best to just go to Danielle Eliska Lyle, fellow dramatist and Native Detroiter.  Danielle wrote an eloquent piece that appeared in Detroit Metro Times  this week and my words are starting to feel like broken records, so I’ll let others continue to break those records:

“I had a hunch the film would be problematic. It was confirmed when the film’s development team — the writers, producers, and cinematographers — were invited on stage: Everyone was white, with the exception of Detroit native Michael Eric Dyson, who introduced Bigelow.”

Danielle left before the film was over and I couldn’t blame her or any of the other people that walked out — it was hard to stomach much of it, especial in the #blacklivesmatter era.

But I usually forge through most things – good or bad – I have a stubborn spirit.

One week before the premiere, I attended a lecture at Charles Wright Museum of African American History.  I had just taken in the Detroit ’67 Perspectives Exhibit at Detroit Historical Museum (where I used to docent in middle school) and met a woman who led me to attend the talk on S.T.R.E.S.S. 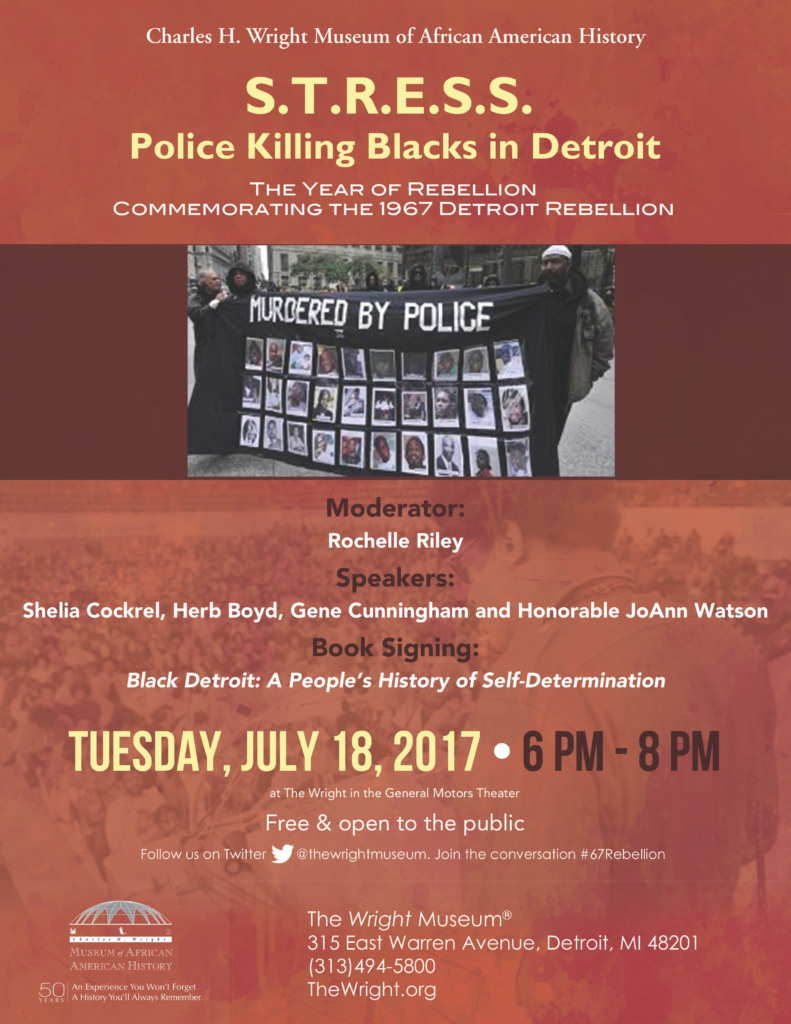 I took in the city some more, visiting Great Lakes Coffee on Woodward Avenue.  I felt like I was back in New York at ‘sNice, a spot I used to frequent in the West Village during my MFA years on Bank Street.  It closed a couple years ago, but the vibe at Great Lakes was similar.  Open space and an atmosphere of productivity.  Some musicians played quietly behind me, others, likely Wayne State University students, worked on their laptop.  A young man approached me asking about my camera, as I was reviewing photos from the exhibit.  He wanted to know about an upgrade and what might be the best camera for him.  I helped how I could, pleased to make more contact with a gentle stranger.

During the moderated Q and A, a woman stood up, she had been up for a job as a city planner in the 70s.   She  recounted how surprised a potential male colleague, I believe she said he was South Indian, was to see her, a black woman… moreover, a Detroiter.   She didn’t get the job.

I ask again… Who is going to stand up for Detroit if Detroiters of all backgrounds and socio-economic levels are continuously barred from positions of real change, influence and power.

Detroit is a city with such a diverse population that I’m not sure all stories will ever be given their justice, but one can try.  “DETROIT” tries… but ultimately, the subject of the city is such a sensitive one.

So “DETROIT” for me is a cautionary tale.  No matter how famous you are… part of that responsibility in my opinion is to employ others who could assist the justice to that piece.  It is looking at the whole of the picture.  An Academy award gives one an extraordinary amount of power… so what are you going to do with it…

Kathryn Bigelow wanted to get the conversation started… so the one she has unearthed is on representation… we’re back to that… we never really left it, she just reminded us, whether she meant to or not.

All photos aside from the poster by Garlia Cornelia.

Links to articles in Bold